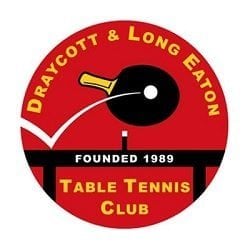 The Club started as far back as 1986 when the father and son team of Roy & Jon Bayliss began playing and then coaching table tennis at Sawley Community Centre. They were then asked to start up a new session at the Long Eaton Community School and in 1987 the Long Eaton Community School Club was formed which eventually changed its name to the Long Eaton Table Tennis Club. It was affiliated to the Derby & District Table Tennis League in 1989 and became an established League Club with a membership of around 40 players. The Club also used facilities on a Sunday Night at the newly built West Park Sports Centre in Long Eaton and many of its players were already gaining County recognition.

However, in 1993 due to rising costs the Club was forced to move from the School premises to a near by dance hall but continued to gain success on both the local and National scene but these premises were eventually sold to become a dentist practice and the Club was again on the lookout for new premises.

Jon literally walked the streets and then stumbled across the Old Boxing Gym at Draycott which was a dilapidated old building that housed a small Community Youth Group and a local Tae Kwon Do Club.

The Table Tennis Club moved to these premises in April 1999 and after taking over the lease when the Youth Group disbanded it immediately started on a renovation programme. Over the next few years the Club improved the lighting and installed gas radiant heating and also improved the décor but as the Club continued to develop it was obvious that it needed a serious cash injection that could really improve the kitchen and toilets and also install some showers.

It was with this pedigree that the then English Table Tennis Association saw fit to put the Club forward to apply for a major grant and a Development project which started back in July 2003 when we became involved with the Community Club Development Fund being administered by Sport England and after a series of meetings the Club produced a Stage 1 Bid for a grant and then in 2004 we employed the services of an Architect who guided us through the design stage and the application for planning permission and by Feb 2005 we completed a Stage 2 Action Plan and eventually we were awarded £310, 000.

However there was a last minute turn of events when the old Scout Hut which stood on this site was unfortunately burnt down one night which then allowed the possibility for the project to increase in size so that we now have a superb 22 x 12m purpose built hall and we were very grateful for the ETTA who allowed the final grant to rise to £410,000.

The Main Contractor finally started on site in February 2006 and the project was completed 27 weeks later on 22 September 2006 and the Club - now renamed the “Draycott & Long Eaton Table Tennis Club” to reflect both its origin and new location began its life in its new home  “Draycott Table Tennis Centre” with 9 League teams and around 70 members.

The £410,000 grant from Sport England had enabled the Club to transform a run down building into a top class Table Tennis Centre capable of staging prestigious events which even included staging a Women’s International in February 2007.

The club is part of Table Tennis England’s PremierClub – the National programme for club development and the Club aims to achieve high standards in the organisation and operation of all its activities. To help us do this the club has adopted Table Tennis England guidelines and policies in several areas such as: Equality and Child Protection, Health & Safety, Codes of Conduct and Roles & Responsibilities for Volunteers.

The Club also organises around 20 weekend events ranging from County Matches, British League Matches, Local Tournaments, Coaching seminars and has hosted many of the Table Tennis England’s prestigious events including:

By 2019 / 2020 season the Club had 20 League teams, 14 British League teams and 6 National Cadet & Junior League teams. There is a 60 strong Junior Squad with 14 players ranked in the top 10 for their age in the country and several players had become National Champions at U/11, U/12 and U/13 level and the Cub won its 8th Bromfield Trophy (National U/18 Girls Team Cup). The Club had also gained sponsorship by Tees Sport/ Butterfly  - the largest Table Tennis supplier in he UK